The debate season runs from November through to February with students meeting each day after school to prepare their arguments and speeches. Each week through the season we have a different topic to debate. It all culminated in ASIJ hosting the Kanto Plain Varsity Debate tournament on Febraury 8. This is the first time ASIJ had hosted this traditional tournament and the day turned out to be a great success on a number of levels. The tournament involved teams from St Mary’s and Seisen as well as ASIJ.

In the final varsity tournament each school has three teams of three and they have two debates against the other schools. This year’s varsity debate topic was “Globalism is imperialism repackaged.” After three rounds of intense debate the result was all dependent on the last debate between the A teams of St Mary’s and ASIJ. In a closely fought contest ASIJ just prevailed and lifted the Kanto Plain Debate League Cup in an awards ceremony held in the Ricketson Theater. ASIJ students were also honored with a number of awards at the end of the tournament. Senior Abby Sneider was the top debater of the tournament and received the All Star award in the A division. Seniors Andrew Deck and Evan Gordenker, juniors Sonia Schlesinger and Luke Yamasaki and sophomore Eve Sneider were also honored with awards.

Earlier in the week the JV debate team had entered six teams of three in the JV Tournament held at Seisen International School when the topic had been “Science is a threat to humanity.” After an evening of debates, ASIJ had carried victories in ten of the twelve debates. With debaters from ninth, tenth and eleventh grade represented, the future for ASIJ debate looks very strong. Congratulations to all students on a fine season. (Coaches Dave Gotterson and Roger Onions) 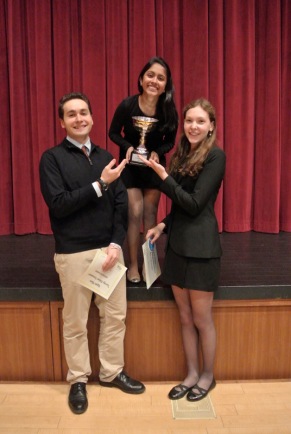 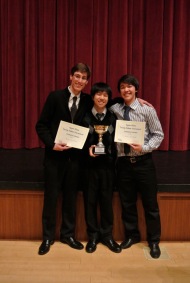