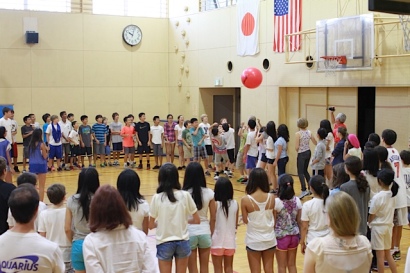 On September 19, 2013, middle school students were led by Adventure Leadership students in a Play for Peace game with a red ball to help celebrate The International Day of Peace, which is officially recognized on September 21st of every year by the United Nations.

Each student was given a popsicle stick with a letter in one of three colors to spell the word “PEACE”. The colors represented teams that formed to help mix the 6th, 7th and 8th graders. Once formed into three groups, students were given a red ball and had to keep it from landing on the ground by bouncing the ball continuously in the air.

This game was played all around the world this week as a symbol of bringing people together and putting peace into action through play. Community meetings this year have been an opportunity for students to mix in ways that have not happened before.

Students have also been creating flags in advisory groups that have individual representation of what peace means to every single student in our middle school. Peace is alive in the middle school! (Peter Dohrenwend, MS Science and Michelle Juhasz, MS Adventure Leadership)