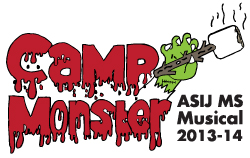 On November 7-9, the middle school cast and crew put on a production of the musical Camp Monster (book and lyrics by Sharyn Rothstein and music by Kris Kukul). The humor-filled show brought laughter and fun. Many members of the audience could be heard humming the refrain of the song “Nobody’s Normal” as they exited the theater.
Getting ready for the show… 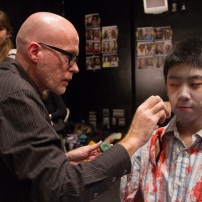 The show is about a summer camp for young monsters run by the camp director Roseanne and her assistant Sylvia, played by Kate Duval and Peyton Solheim. It soon becomes clear that the camp director’s intentions are not what they seem to be. As Roseanne tries to change the campers from monsters into something they are not, various characters played by Brandon LaBarge, Ava Hall, Isabel Bosch, Valerie Grespan, Ryo Kamibayashi, and others need to take charge to save the monster kids. 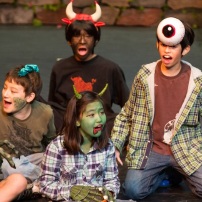 The ensemble cast featured students in grades 6-8. The show was directed and produced by Catherine Berghahn, David Neale and Dave Swanston. The sets were designed and built by Ed Gilmartin with assistance from Glenn Hoskins. Costume designs were under the direction of Naomi Hoff and a team of volunteers. The show was produced with the assistance and support of the PTA’s Friend of the Fine Arts (FOFA) under the leadership of Julianne Bosch and many other members of the middle school community. 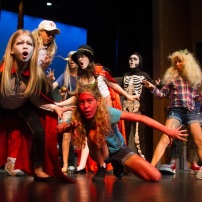 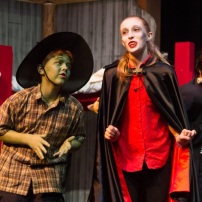 Student leadership was shown by eighth graders Meg Westmoreland as stage manager and Gen Shinkawa for lighting and sound. We were also assisted by a team of high school crew members (Yume Kashimura, Alex LaBarge,Sarah Scholle, Hikaru Takechi, May-Lee Hoshi and Jennifer Marklevits), and George Luton, who recorded the piano for our sound track.

Thank you to everyone who helped make this show come to life.
Remember: nobody’s normal especially you! (Catherine Berghahn, MS Musical Director)