Following a very busy first half of the school year, the Middle School Student Service Leadership Team (SSLT) continued to work hard raising money and providing services for our school and community during the second semester.

In December, SSLT members worked with other students in our middle school to practice and deliver virtual English lessons to students in grade 5 at Sakari Elementary School in Ofunato, a region affected by the earthquake and tsunami of March 11, 2011.  All students involved with this project found it to be a great experience.

In February, we had our annual Valentine’s Day Bake Sale.  This is one of our most important fundraisers of the year.  However, this year, due to snow, we had to postpone our sale from Friday, February 14, to the following Monday.  Even with this glitch in our planning, we were still able to raise ¥50,000 during the middle and high school lunch periods, which we earmarked as a donation for Room to Read.  Room to Read is an organization that is working to provide education for poor children all over the world, with an emphasis on giving educational opportunities to girls.

In March, the six graders supported OXFAM by having a Hunger Banquet. OXFAM is an organization where they find solutions to poverty. What we did, was that each of us paid a ¥500 donation, and drew a card. There were three colors and each color had its own meaning:  yellow was for the high income (with the most food), red was for the middle income (with medium amount of food), and green was for the low income (the lowest income with the least amount of food). The people who were in the high income had a large amount of food that could make someone very full, the people in the middle income had the amount that can at least make them half full, and the people in the low income had a bowl of rice and water. By doing this activity, we got to learn how people feel all around the world. Also, the sixth grade was able to donate ¥54,000 to OXFAM.

In April, we joined the efforts of the high school Philippine Relief Organization to sell PRO bracelets with proceeds going to help the four million people who are still homeless as a result of last year’s devastating typhoon.  We were able to raise over ¥10,000 for this important high school service group. 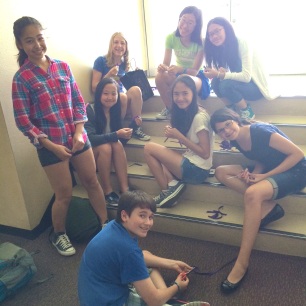 In May, we all brought in baking for a staff appreciation event.  We organized the treats into baskets and wrote thank you cards for the following staff groups:  cafeteria/kiosk, guards, bus drivers, maintenance, and engineers.  We delivered the baskets of baked goodies and cards in person and thanked these wonderful ASIJ staff members for all that they do for us!

In late May, we held a “Fun Run For A Cure” to raise money for the American Cancer Society.  This included a forty-five minute run around the MS field with a yummy ice cream surprise at the end.  In total, students and staff ran over 1000 laps.  We were able to raise over ¥50,000 for a very important cause.

We also had a “Guess the Number of Dum Dums” drawing and photo booth at the last dance of the year, sponsored by the 6th grade.  We added the money we made at the dance to our American Cancer Society donation.

Thanks to everyone on SSLT and great work!  We will be back at work once again in September!  Everyone, have a great summer. (Sara Hagiwara, grade 6 student; Benny Ward, grade 6 student and Anna Van Hercke, grade 7 student)