The month of March saw ASIJ Middle School art students putting their artistic visions and skills on display through the Artscape exhibition and two art challenges. 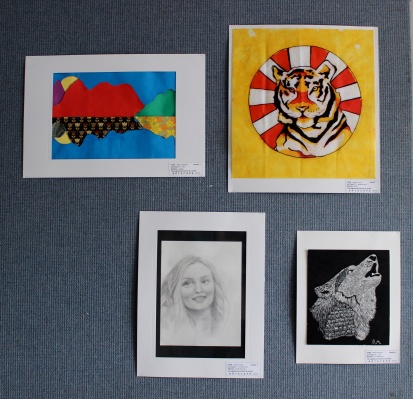 The Artscape exhibition was held at a brand-new venue this year, the Azabu Kids to Teens Hall, a 7-minute walk from Hiroo station. Artscape is an annual exhibition of artwork by MS and HS students from 13 schools across the Kanto Plain, including 26 ASIJ middle schoolers.  The Kanto plain Artscape show, held from Feburary 13 – March 1, 2015 included pieces that were selected by the MS and HS Art teachers to represent ASIJ. You can read more and view all the artwork exhibited at Artscape on their website.

In addition to Artscape, students also had a chance to design the cover for this year’s Kyogen program. Middle School Japanese teacher, Machi Nakamura and HS Japanese teacher Kyoko Inahara presented the contest to all ASIJ students. It had to have the traditional pine tree , the word Kyogen written in English or Japanese and a possible character or image of a Samurai sword and a rooster. The winning design was used for the program cover and the artist was awarded a ¥3,000 Amazon certificate. The rest of the entries were used to advertise the show which opened the night of March 10th in the Ricketson Theater.

ASIJ’s class of 2019, current 8th-graders,  also participated in a class t-shirt design contest. This year we had an exceptional assortment of creative designs. The competition was opened to all 8th-graders who submitted 37 excellent designs. They all voted for their best choice electronically on March 11th during their Academic Advisory time. T-shirts will be made with the winning design enlarged on the back and with second place design on the front left side. They will be a gift from the parents to the 8th-graders after our Celebration ceremonies in the RT and the reception in the cafeteria.