Over the past several months, it became apparent that the social groups at our middle school were, as is the case in many schools, rather “clique-ish.” We designed lessons and addressed the issues of inclusiveness, excluding others and relational aggression, through our Social Emotional Learning program. While progress was made, we discovered that some students had been told by other students, “you can’t sit here,” when trying to find a place to eat in the cafeteria for lunch. After further exploration we found that this type of behavior was more prevalent than we had realized.

Frustrated with this behavior, and searching for a way to address it in a more direct manner, we began a flurry of discussions and did extensive research. Our research took us to the Teaching Tolerance website, and there we discovered the “Mix it Up Lunch” program. Using this as our framework, we adapted parts of the program to fit the ASIJ Middle School. 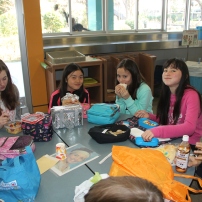 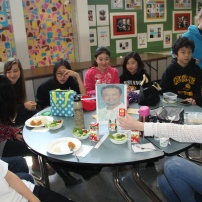 In February of this year, through our advisory groups, we introduced the idea of this special “Mix it Up Lunch” event. The Mix it Up Lunch event was planned to help students become aware of the patterns of behavior sometimes exhibited in the cafeteria (and elsewhere) that exclude others. Therefore, one goal of the Mix it Up Lunch day was to artificially create new lunch groups for at least one day, that crossed grade levels and social groups/cliques. Another goal of Mix it Up Lunch (and a big part of the overall SEL program) was to help our students develop the skill of empathy. By explicitly teaching our students to be more aware of other people’s feelings, the hope was that they would be less likely to exclude others.

We devoted five SEL/Advisory lessons to prepare our students for the Mix it Up Lunch event. The first two lessons focused on identifying the differences between friendship groups and cliques. We asked students to reflect on whether cliques are positive or negative, as well as how and why it can be important to make friends outside of a clique. Small group discussion centered on these questions as well as the following: What would happen if the groups at our school mixed it up; what might keep the groups from wanting to mix it up?

On March 12th, we finally celebrated the event. Engaged in conversations during lunch time, with help from conversation starters placed at each table, students discussed questions such as, “if you could only eat ice cream or chocolate for the rest of your life, which would you choose and why?” and “traveling to outer space or to the depths of the ocean – what would be your preference?” Students embraced this opportunity to share fun ideas and opinions as they became more familiar with their new group members. An outcome of this activity was to help students understand that different people may have similar ideas about topics, and that forming connections with peers outside of friend groups is a real possibility.

After lunch, the students and advisors traveled to the MS Gym, where the culminating activity occurred. With the song “Shake it Off,” by Taylor Swift, blaring over the sound system, each group performed 10-12 seconds of dance moves in a “popcorn/wave” manner around the gym. The advisor group concluded the song, and all students followed the lead of the teachers in true Flash Mob style, the entire MS community united in one big mob of good vibes! With smiles, laughter and a great deal of bounce in their steps, the students and advisors alike, headed back to class for the rest of the afternoon.

As we prepared students for this event, our aim was for the students to have fun with with the activities we developed; we wanted the students to be engaged and inspired to stretch themselves on their own, not just on a designated day. Reflecting on these ideals, we sought feedback from the students and advisors. Understandably, the feedback was mixed, and included very positive feedback as well as constructive criticism. However, the outcome was certainly met—students mixed it up and engaged in conversation and activity with students from diverse groups and grade levels. The best result of the day was summed up by one of the participants who remarked at the end of the event, “What a great day! So much positive energy!”  We hope the spirit of the Mix it Up Lunch event stays with the students and faculty as we continue through the year. (Jackie Douglass, MS Counselor)