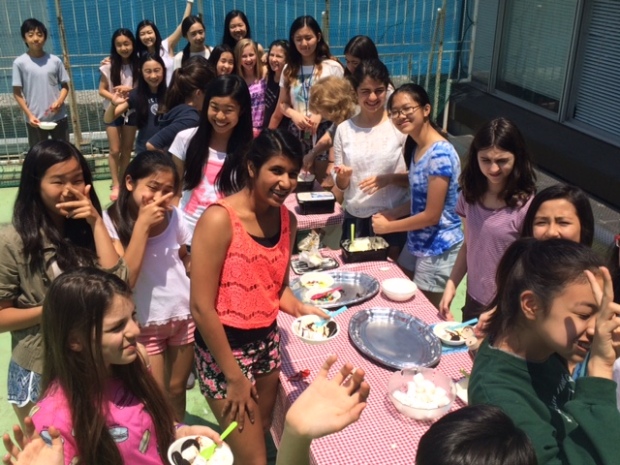 It has been a productive service year for the Middle School Student Service Leadership Team (SSLT). Collectively, students in this 6th-8th grade co-curricular raised and donated over ¥300,000 for the 2014-2015 school year. Below, students have shared their highlights from the spring semester.

Did you know one in every nine people on our planet go to bed hungry each night? Or that hunger kills more people each year than AIDS, malaria and tuberculosis combined? You probably didn’t. Here in Japan, we are very lucky. To most of us, poverty and hunger are a distant problem that have no effect on our daily lives. To change that and to bring the startling reality of those problems to the kids of ASIJ’s 6th grade, we held the Hunger Banquet, a yearly tradition.

The Hunger Banquet was a lunch that divided up ASIJ’s 6th grade students into financial classes based on a lottery—20% of people got upper class, 30% got middle class and 50% got low-class. The meals were handed out accordingly. Many kids felt that it was unfair that they only got rice, but that is the way life really is. The Banquet was only a small taste of what life is like in poverty.

Supplementing the banquet, Ms. Maiko Morishita came from Oxfam Japan, an NGO that is working to eliminate poverty, to speak. Ms. Morishita joined Oxfam Japan in 2010. She oversees Oxfam Japan’s policy and advocacy work on poverty, hunger and climate change issues. She is also a happy mother of two. Her speech, which was blunt, realistic, yet touching at the same time, taught ASIJ’s kids about the real problem of hunger. Through that new awareness, we were able to raise ¥50,000 for Oxfam Japan to aid in the cause of ending world hunger. Well done, SSLT. (Laruen H., Grade 6) 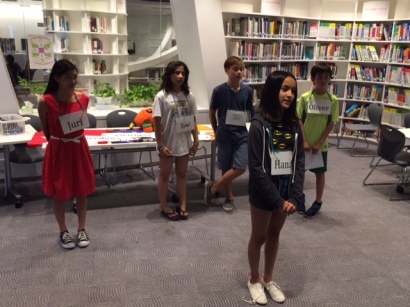 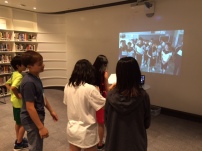 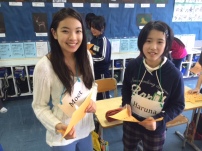 TVEC stands for Tohoku Virtual English Lesson. SSLT members and some other students volunteered to teach 5th and 6th graders English. The students are from Ikawa, a location in Northern Japan (Tohoku), one of the places where the 2011 earthquake caused severe damage. Many of the students had lost their parents and houses in the tsunami that followed. We contacted them over Skype and taught them simple terms, such as introductions, numbers, fruits and holidays. In 2015, some of our student-teachers got to visit their pupils in Ikawa. They stayed there overnight and had a lot of fun with the students while visiting their school. We will continue these lessons in September. (Amberley Y., Grade 6)

Room to Read is a non-profit organization that helps children receive an education, and they are also working on gender equality in education. Over the course of six years, Room to Read has established more than 3,000 schools across Asia and Africa, helping many children. SSLT wanted to support Room to Read, and, to do that, we raised money, collecting donations from ASIJ’s students. We managed to send ¥50,000 to this organization along with the money that was raised in the Middle School and High School for this important work. (Jessica T., Grade 6)

Do you ever stop to wonder who makes our food? Who drives us to school? Who cleans our school? Who protects our school? Who fixes and builds our machines? Well, there are many people who help make our school a better place. For example: cafeteria workers, bus drivers, maintenance, guards and engineers. Because of all their hard work, the SSLT decided to give baked goods and touching cards to them on May 8. Every single student in the SSLT program made at least a dozen baked goods. In addition, five students in the SSLT program made a very creative and kind card for each of the ASIJ staff. In the end, all of the staff were extremely happy to receive the baked goods and cards. As you can see, showing how grateful we are to the ASIJ staff can make a big difference! Why don’t you decide to give a special gift to someone you feel grateful towards today? (Natalie O.H., Grade 7) 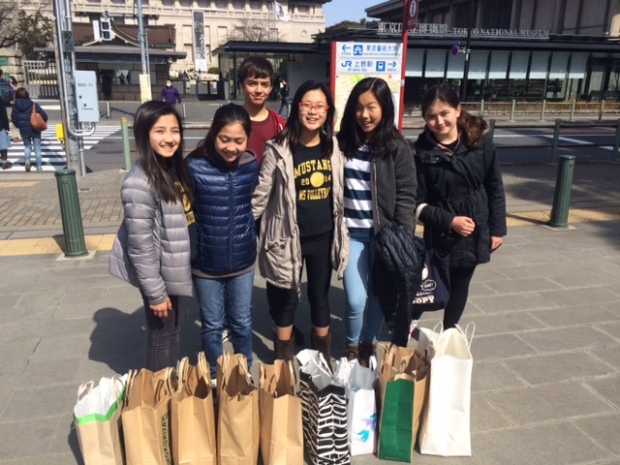 On February 28, SSLT students handed out onigiri to the less fortunate who had been standing in the cold from the early morning in Ueno Koen. The day before, students made the onigiri in the Elementary School staff room. The rice was purchased from our cafeteria and SSLT made a donation for the rice to the Elementary School Rice Project. Along with Second Harvest Japan, who was in the park on Saturday to offer a hot meal, SSLT handed out over 300 onigiri. It was a heart-warming experience to actually give onigiri to the homeless because they really appreciated it. (Maya T.K., Grade 6)

During February, our members of the SSLT helped bake cookies, cupcakes and other awesome treats. The money we raised, approximately ¥50,000, we gave to charity. Our bake sale was incredibly successful. Many middle schoolers and some high schoolers came to our baking booth and bought our delicious baked goods. All of the time and effort was worth it, knowing that the members of the SSLT could help those in need. (Moet H., Grade 7) 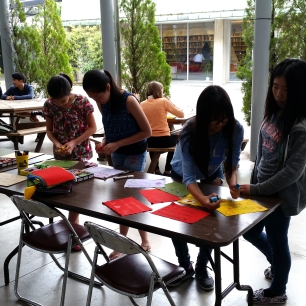 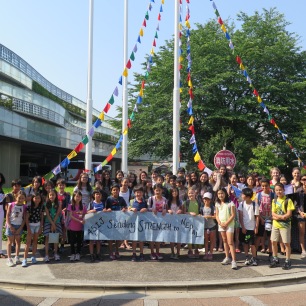 After the earthquake in Nepal, some of the high schoolers had the idea of making a donation for those suffering from the damage by making traditional Nepalese prayer flags. The Middle School SSLT, together with service groups from the High School and Elementary School, joined in this effort. We set tables up in the MS Plaza during lunch so that students could design a prayer flag on behalf of the people of Nepal. Students decorated one flag for a ¥500 donation. All of the flags were sewn together and sent to the Lincoln School Relief Fund in Kathmandu along with all of the money raised by each division.

This school wide foundation was one of the last fundraisers that SSLT completed this year. The SSLT lead the Middle School in raising ¥50,000. Thanks to everyone who designed a flag! (Marieka P., Grade 6)

Over 8000 deaths—men, women, children—and thousands of collapsed houses. The Nepal earthquake has caused a lot of suffering in many lives. It has been a huge disaster. The Student Service Leadership Team organized a bazaar in addition to selling Nepal Prayer Flags to help the struggling Nepalese. During the bazaar, every SSLT member was responsible for bringing one item worth between 500-1000 yen. Students brought in items from home, which they priced themselves and sold during their lunch period. Items ranged from ¥200-1000 and consisted of books, jewelry, puzzles and other assorted treasures.

The event was a complete success. Our SSLT raised ¥30,000 (including donations) for food and supplies for the people of Nepal affected by the earthquake. This was added to the school total that was sent to the Lincoln School relief fund. Thanks to all SSLT members for their contributions and to everyone who supported this fundraiser. (Vrinda S., Grade 7)

You can read more about ASIJ’S Nepal Earthquake Relief efforts on our “Extending a Helping Hand to Nepal” post.

You can alsp learn more about the Lincoln School and their relief fund on their website or on Facebook.