The Yamano College of Aesthetics is operated by ASIJ alumna Jane Yamano ’83, who has offered opportunities for students to visit and practice Japanese language and Tea Ceremony customs for many years. Our relationship with the college has been mutually beneficial. Not only does the visit allow our students to practice Japanese with native speakers and Sado in an authentic tea house, it also allows students of the Yamano College to practice kimono-fitting and styling.

Two ASIJ students who went on the trip shared their thoughts and experiences.

We spent a lot of time watching the students of Yamano practicing their skills. I was surprised at the numerous “heads” that they practiced on and the way that they meticulously worked. The concentration that they display is amazing. I remember that one of the floors smelled particularly like nail polish remover; this reminded me of the hard work that the students put in. I realized that work in aesthetics and beauty is much more in-depth than I had previously thought. 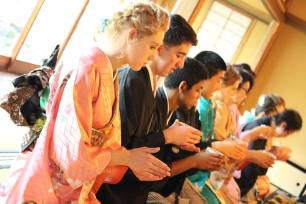 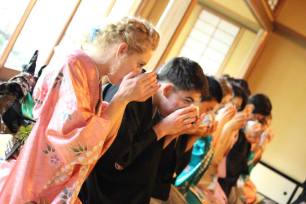 I really enjoyed my visit to Yamano because I was able to experience a tea ceremony, which we have been studying in class, at a real tea house for the first time. The entire tea ceremony was a surprise for me. For example, although I had worn a kimono in the past, I was still astonished at the amount of time it took to put one on. My experience  participating the tea ceremony was something that I completely enjoyed. Moreover, I noticed the elements of Wakeiseijaku (和敬清寂: harmony, respect, purity and tranquility), that we studied, throughout the tea ceremony, especially the element of Jaku (寂) in the placement of samurai’s sword outside of the tea room. All people enter through a smaller door, which demonstrates modesty. The symbolic expressions of modesty contrasts, in an interesting way, with the Western style of modesty: simply stating one’s humbleness. It goes to show me the difference between Japanese customs and the Western traditions that I’m used to.

I thoroughly enjoyed the Yamano College. It was nothing like what I had imagined that it would be. I think that my favorite part of the day was the tea ceremony. It was a very interesting cultural experience that was new to me. I learned a lot about Japanese culture, such as the face (front) of the tea cup and how you have to turn the cup to the left twice in order not to drink from the face  of the cup. I also learned that everyone was required to be on their knees inside the tea room, from samurai lords to peasants, with the only exception being the emperor.

I loved the building that we had the tea ceremony in; I cannot believe how old it is and how the condition of the structure has held up after so many years. Being built directly after the war and moved 50 kilometers from its original location is quite the feat, let alone to keep it in pristine condition throughout. I love the smell of the tatami rooms that we were able to explore, I have only experienced these rooms on JUMP trips before. Apparently the scent of a teahouse is prepared to welcome guests.

During the tea ceremony, it was rather painful for me to sit on my knees and ankles since I severely injured my ankle in football. While I was rather uncomfortable, I realized the skill that it takes to do this for many hours at a time.

I really enjoyed being dressed in a kimono, this was a new experience for me as I had never worn one before. Other than having a few issues with stairs, and the tediousness of eating pizza without plastering myself in food debris, it was very nice. It seems like a lot of effort to wear on an everyday basis. I don’t think that I could’ve figured it out without a literal team to help me. 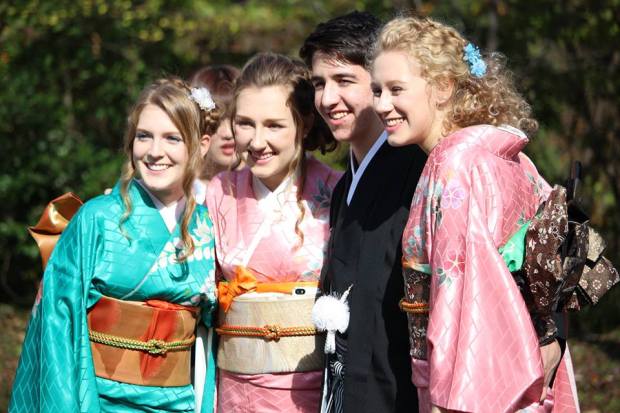 I had a great time and I saw and practiced things I learned in class. At the end of the day, I realized that everything was explained to me in Japanese, but I did not have trouble understanding. That was amazing! If I had one complaint it would be that we couldn’t stay longer. Thank you again for inviting me on this trip. It was very memorable.

We would like to thank John Parker from the Yamano College of Aesthetics for organizing the great day. Also, thank you to the Yamano and Nishida families for making a truly wonderful and meaningful exchange with ASIJ possible. (Kaori Hakone, High School Japanese teacher)