High school students recently took advantage of a unique opportunity when the Japan Center hosted guest speakers Chosei Kabira and Jon Kabira. Their visit connected students with the Japan Center’s central mission of Onko-chishin (温故知新)—developing new ideas through learning from the past. 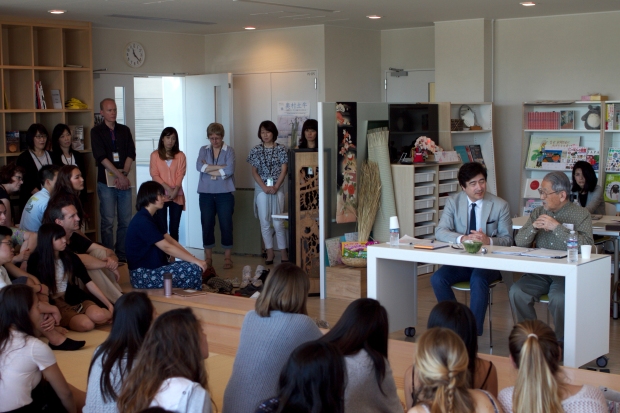 Machiko Naito’s (HS Teacher) Japanese 9 class recently began studying the historical context regarding Japan’s role in World War II, particularly the Pacific War, from the Japanese perspective. Students are exploring questions such as “What happened? Why did it happen? What did the war mean to the individual, community, region, and country?” Eager for her students to connect more directly to this time in history, Machiko coordinated with the Japan Center to bring Chosei Kabira, a survivor of World War II, to ASIJ and speak with the Japanese 9 students. Chosei’s son, Jon Kabira (freelance presenter, narrator, broadcaster and ASIJ alum/parent), helped to facilitate the interview-style session. Coincidentally, the Japanese 9 students were already aware of Jon Kabira, as his skillful interviewing techniques were featured in a Japanese Kokugo textbook.

An audience of close to 80 people, including Japanese 9 students, Japan Seminar students, faculty and parents, attended the session, during which Chosei shared his incredibly personal and emotional stories. 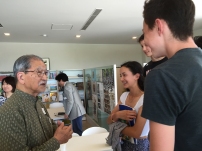 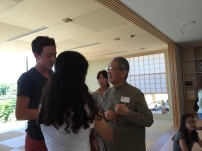 Students of Japanese 9 reflect on World War II through a visit by special guests Chosei and Jon Kabira:
Chosei has a unique and diverse perspective on World War II. He was born in Okinawa, but spent his early years before and during the war in Taiwan. Like many young boys at the time, Chosei was eager to help his nation by becoming a soldier and helping Japan win. However he was left frustrated as he was too young to join the military. Instead, he offered to become a suicide pilot or kamikaze which meant that he would charge a plane loaded with bombs into allied warships. However, as he tried to offer himself to the local air force base, Chosei was denied, “Japan did not have any more planes to be used for kamikaze.” This was when he realized Japan was going to lose the war. As luck had it, Chosei was “able to survive and not become a victim of a senseless war.”

After the war ended, his family moved back to Okinawa. He then received an ROTC (Reserve Officers’ Training Corps) scholarship to study radio broadcasting at Michigan State University. Chosei earned a bachelor’s degree in 1956 and a master’s degree in communication in 1960. He met his future wife, Wandalee Weaver (Former Faculty ’77-’90) at university.

Sarah Nakanishi (Grade 11) asked, “Did you hate the Americans after the war?” Chosei replied, “Not at all.” Reflecting on the response, Sarah writes, “During the Okinawa War, many innocent civilians were killed in cold blood and we could not fully understand how he could not have had the slightest amount of resentment towards the Americans. These people killed his friends, family and relatives, yet Chosei was still able to find a place in his heart to forgive. Moving past such tragedy and barbarity like war is extremely difficult; in fact many have not been able to do so as they still hold grudges even to this day against other nations that hurt their own country.”

“Chosei explained that we must grow and move on from the hatred of war and to strive to become friends. We must grow from our past and ensure that war will never be able to harm any innocent civilian ever again. There is something always to be gained from the past as we look to the future.”

The Japan Center is hopeful that they will have the opportunity to work with the Kabira family again in the near future, perhaps next time to a larger audience in English. Machiko Naito said that she and the students “would like to express their special gratitude to the Kabira family and Japan Center to provide an excellent learning opportunity. We will carry their wish for peace for the future.” Machiko and the Japan Center would also like to recognize the following students for providing impeccable English translations for their non-Japanese speaking peers during the session: Christopher Sasanuma (Grade 9), Masa Kawasaki (Grade 9) and Tyler Cross (Grade 9).