ASIJ held a celebration on November 15 to honor Mustang senior Britt Sease as he signed a national letter of intent to run track for the University of Arkansas. Families, friends, teammates, coaches and teachers gathered to share this special moment with him. Ryosuke Suzuki (track head coach, cross country co-head coach) writes on Britt’s running record at ASIJ.

Britt came to ASIJ in 2014 and immediately made an impact on our track program. In his first year as a Mustang, he lowered his personal best in the 400m from 54 seconds to 50.26, just a shy of our school record.

His junior year season was nothing but record breaking. In the first 800m race of his high school career, Britt broke the Pacific record with the time of 1:54.63. He continued to lower the 400m time, race by race, and ended the season with a victory at the Far East Championships with the time of 48.59. By the end of 2016 track season, Britt became the school record holder in the 200m, 400m, 800m and the 4 x 400m relay. It is unusual for one athlete to hold records from the 200m to the 800m. 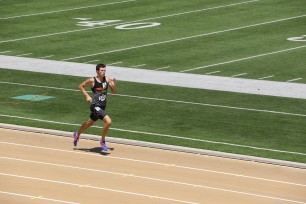 Britt also runs track in the US during the summer under Coach Mike Trexler of Arkansas. He competed in the USATF National Junior Olympic Championships for two summers and also shattered his personal bests in the 400m and 800m at this year’s championships in Sacramento (47.55 and 1:53.66 respectively). He will go back to his home state of Arkansas next year and continue his track career with top athletes from all over the world. Congratulations to Britt Sease as well as his parents Geoffrey and Suzanne Sease!

One thought on “Senior Britt Sease Signs for Arkansas”