We first heard about the film Paper Lanterns through the International House of Japan, where a screening event was held in April. Having announced this opportunity to our community, a number of our faculty were able to attend, telling us afterwards what a moving film Paper Lanterns was and how much our students would benefit from viewing it.

Half-way across the globe, Mia Weinland ‘15 met with the producer of the film, ASIJ alumnus and president emeritus of Japan Society in Boston, Peter Grilli ‘59, at the 68th Japan-America Student Conference in Boston, where they also hosted a screening of the film. Eager to bring Paper Lanterns to ASIJ, Mia reached out to her former teachers and we immediately got in touch with Peter and the film’s director, Barry Frechette. Over the next few months, we worked with Peter and Barry to schedule a screening and visit to ASIJ. 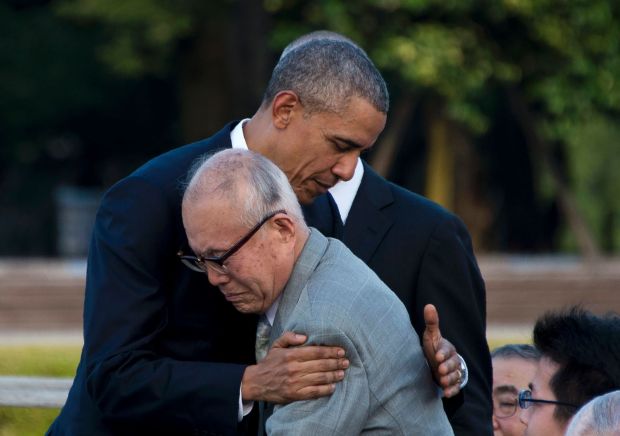 Paper Lanterns, an award-winning documentary, tells the little-known story of 12 American POWs who lost their lives to the atomic bomb dropped on Hiroshima in August 1945. It is also the story of Shigeaki Mori, a Hiroshima historian and hibakusha (atomic bomb survivor), who was 8 years old at the time of the destruction of Hiroshima and who has devoted decades of his life to preserving the legacy of those lost Americans, creating monuments to their memory. Mori-san is the man whom President Obama embraced so warmly in Hiroshima on May 27 of this year, immediately following the President’s historic speech in the Hiroshima Peace Park.

Thanks to the generous support of the filmmakers, Paper Lanterns was made available to our ASIJ community. We began by hosting an open film screening after school, on November 7, for the wider ASIJ community. Nearly 100 parents, faculty and students came together to see the film. 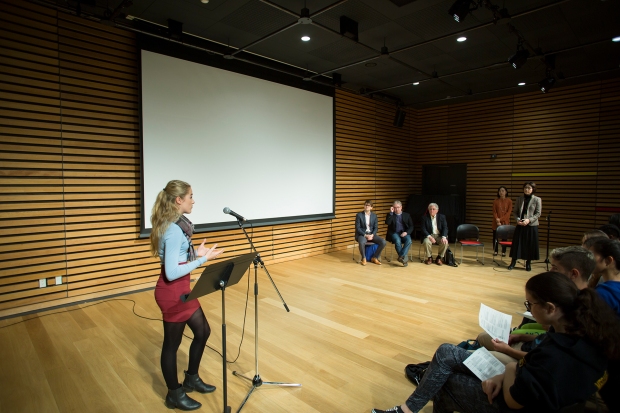 When this film was first introduced to teachers, we learned that many teachers found the content of Paper Lanterns particularly relevant to what they are teaching in class. Spanning various subject areas in the High School, over 150 students from classes such as Japan Seminar, Modern World History, Japanese 9 and Media Literacy watched the film in class, reflected and identified key questions and discussion points to address to the Paper Lanterns crew during their visit on November 8.

We spent the first part of the session re-watching the pivotal last 10 minutes of the film together with director Barry Frechette, producer Peter Grilli and music composer Chad Cannon. Following the clip, student representatives from classes that had the opportunity to view the film presented a short summary on how they used the documentary in the context of their coursework. The students then proceeded with insightful and thought-provoking questions which dug deep into the film’s themes, their views on the bombings and the film-making creative process.

“I really liked the film especially because it captured Mr. Mori’s selflessness and compassion towards finding the families of the POWs. I did not know that there were POWs in Hiroshima and that they passed away, so I was able to learn a lot from this film. I hope that many people watch this film and understand how terrible war is and make an effort to build peace.” –Momoe Nomoto (grade 10)

“Teachers are always searching for authentic experiences for their students,” says Japan Seminar teacher, Kathy Krauth. “I know the interaction with those involved in the production of Paper Lanterns left a significant and lasting impression on the Japan Seminar students, especially the example of individual and personal perseverance and how individual commitment can make a difference in the world.”

Following his trip to ASIJ, Peter also contributed a reflection on his visit and our students.

“The session at ASIJ was extremely meaningful, as well, for all of us on the Paper Lanterns team. We were honored to be there, and delighted to find all the students so well prepared. We have reflected on it a lot among ourselves. For us, an essential audience for this film is young people who may have no prior knowledge of nuclear warfare or the Hiroshima/Nagasaki experience. They are the future!”

On behalf of ASIJ, we want to extend a huge arigato gozaimasu to Barry, Peter and Chad for visiting and sharing  Paper Lanterns with us. We hope that our students, inspired by projects like Paper Lanterns, will contribute their time, energy and talents to improve the quality of life in our families, schools, communities, nation and world in the future.

To learn more about the film, please watch the movie trailer and visit www.paperlanternfilm.com.