May 30, 2017
Wendy Rathgeber (ELC teacher) writes on a special, May 17 classroom animal-cafe project after  her kindergarten class’ recent visit to the Ueno Zoo, wrapping up their animal unit.

Following our recent trip to the Ueno Zoo as part of an animals unit, we revisited a list we created prior to the trip of animals we thought we might see. We asked each other, “Did we see any hedgehogs?” The class responded, “No!” One student said, “But I’ve been to the hedgehog cafe,” prompting all the students to contribute animal cafes that they have seen or visited. They listed the bunny cafe, the owl cafe, the cat cafe and so on. As a class, we decided that a perfect end to our animal unit would be a project to open a new animal cafe in Tokyo. After a lot of discussion, the children settled on the bat cafe, which they named the Echolocation Cafe. The children created bat shaped menus, bat fact cards for each table, origami bats and used their sewing skills to make a bat stuffed animal.

We decided to open the cafe for our parents and serve “real” food and drinks from the menu. We served bat shaped cookies and chocolate cupcakes. We also served a “batte” (latte), “midnight (chocolate) milk” and a “bat-tango (mango) smoothie”. The children had the chance to work in shifts and took turns taking orders and serving, preparing orders, welcoming customers and demonstrating how to hold and take care of a bat. 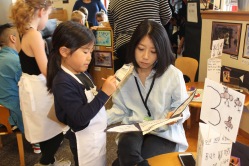 The children also used a variety of media to create bat-themed artwork. The pieces hung on the walls of the bat cafe and were available to purchase. When the cafe closed we calculated the money collected. Our class raised ¥27,000 from the cafe and art sales to donate to Second Harvest and the Ueno Zoo.