Fred and Yukari shared stories about his first visit to Japan while in high school, his first experience  with Japanese manga and its popularization in the US through the works of artists such as Osamu Tezuka, Hayao Miyazaki and Yoshiyuki Tomino. Fred also spoke on his own life and work facilitating exchange between Japan and the United States.  Attendees of the lecture included students from our advanced Japanese course. Tenth graders Anna Komisarof and Rona Kitamura write on the trip.

Rona Kitamura
During his lecture, Mr Schodt presented a slideshow on two topics: Japanese Manga Introduced Abroad and The History of Cultural Exchange Between Japan and America. In Japanese Manga Introduced Abroad, Mr Schodt shared his past works from when he first became interested in manga to some of his most recent works including his translations of Astro Boy and Phoenix as well as his book Manga! Manga! Mr Schodt talked about the process he went through while writing these works and it was fascinating to see how much thought he put into choosing the books to translate. He also showed us a graph of the sales of Japanese manga abroad from 1980. It showed a sudden exponential growth of the sales around the 1990s to the 2000s, while most of Mr Schodt’s translated works were written around the early ’80s. He explained that it was very hard for him to choose which mangas Americans would like to read. 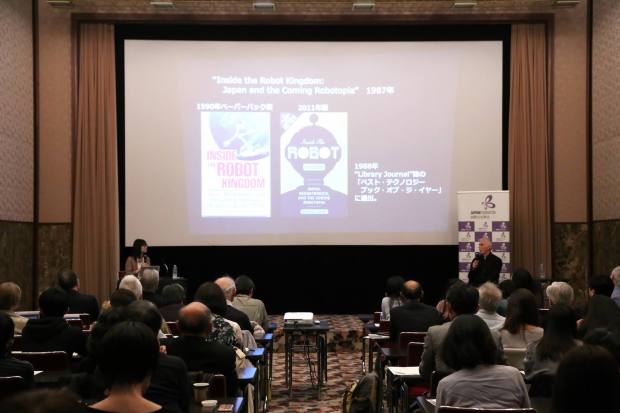 In The History of Cultural Exchange Between Japan and America, he introduced many of his written works such as America and the Four Japans and The Four Immigrants Manga: A Japanese Experience in San Francisco; 1904-1924. These books are nonfiction and pertained to certain historical events that took place in both Japan and America. For example, his book Native America in the Land of Shogun: Ranald Macdonald and the Opening of Japan is about an Native American immigrant named Ranald Macdonald that went to Japan during the Edo period and became a translator and a teacher. He impacted Japanese culture by teaching English to many students who eventually helped as translators. It was really interesting how Mr Schodt wrote about historical events that are not widely known but benefit the relationships between Japanese and American culture.

I believe many of us found it fascinating how Mr Schodt made connections between Japanese culture and American culture through manga and how it had a huge impact over time. Also, because Mr Schodt is an alumnus of ASIJ, it was interesting how as students we can impact both cultures coming from the same environment.

Anna Komisarof
My Advanced Japanese class had the privilege of attending the lecture by Frederick L Schodt, who has been working to spread manga to the United States for decades. My classmates and I had the amazing opportunity to listen to his story.

The set-up was different than what one might expect when hearing the word “lecture.” There was a moderator and it felt more like listening to a conversation than a traditional lecture. This made it more engaging and Mr Schodt’s charismatic personality really shined through. The lecture itself was extremely interesting with topics ranging from Mr Schodt’s life to all the books he has written and the history behind them.

He is an ASIJ alumnus and attended International Christian University as an exchange student so all of us felt like we could relate to his background. It was interesting to see what Mr Schodt did with his multicultural upbringing. Through his presentation, I could really tell that he has a burning passion for manga and has dedicated his life to spreading the beauty of manga to the United States.

My favorite part of the lecture was the portion where Mr Schodt spoke about the Japanese acrobatic group formed by an American acrobat and Ranald Macdonald, who facilitated the modernization of Japan. As a person who loves history, I found both of these stories extremely compelling. I didn’t know that there were any interactions between Japan and America during the 250 year isolation period which ended in the 1800s.

I feel like the reason students at ASIJ can live the lifestyle that they do is partly credited to those who helped to open Japan to the world. At first I was intimidated because I knew nothing about any of the subjects that Mr Schodt spoke on, but by the end I found myself completely immersed in the lecture.