On the week of Monday, Oct 16, middle schoolers had a mystery to solve…Who murdered Mr Deadright? Tanja Kerbs (middle school librarian) writes on the exercise in deduction.

On October 16, middle school students arrived at school to discover a murder in the middle school library. The “principal,” Mr Deadright, was dead and the circumstances shrouded in mystery. Sergeant Friday lined up six possible suspects to the dastardly deed. Each day for a full week, students received clues via the middle school bulletin in order to piece together the chain of events that lead to Mr Deadright’s demise. 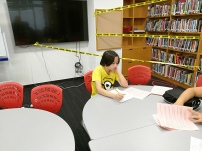 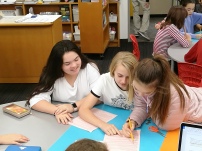 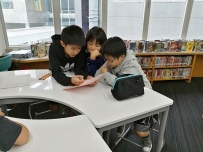 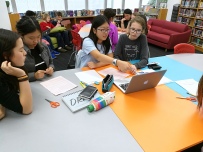 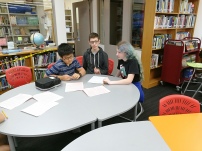 Nearly 40 middle school students gathered in the library on October 24 to participate in the culminating event, a mock mystery that involved a murder, a victim, a detective, 41 clues and six suspects. Students worked together in teams to evaluate the clues, consider the evidence, identify motive and pin the perp—an exercise that promoted critical thinking, required collaboration and encouraged empathy to piece together the complete crime story. It was also a lot of fun. In an interesting addition to the exercise, students also tried to guess the real identities of our middle school teachers and staff, disguised as the players and suspects.