David Neale (musical director/producer) writes on this year’s high school musical, a production that introduced the audience to “the woman in the chair,” who led viewers through the show, putting on a record of her favorite musical to deal with “a little self-conscious anxiety resulting in a non-specific sadness.” Her record plays, The Drowsy Chaperone comes to life and the stage is thrust back in time to the 1920s as it filled with student performers. How good can a show be with a title like The Drowsy Chaperone? Turns out it can be “That blew my mind and I absolutely have to see it again!” good. Most of the audience that attended this year’s high school musical didn’t know what to expect. But for a rollicking two hours they were treated to the unexpected twists and turns of this musical within a comedy.

Instead of an overture kicking things off, the audience listened to a disembodied voice speaking to them in complete darkness. When the lights finally came on, they got to see the source of the voice, known to us only as “the woman in the chair.” Ensconced in her modern apartment, she decided to play for audience members the record of her all time favorite musical,  a (fictional) 1928 hit called The Drowsy Chaperone. We finally get our overture and after a few minutes the recorded audio from the record player melded seamlessly with the 22-student live band in the orchestra pit. Before viewers knew it, the characters from the show popped into the apartment from the previously inconspicuous refrigerator. 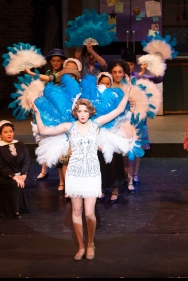 As the show went on, the woman periodically stopped the record to address the audience, freezing all the other cast members on stage. At one point the record skipped, forcing the cast to repeat the same line and dance move until the woman can run to the record player to get it back on track. Plenty of other surprises awaited as the audience watched on, not the least of which is the arrival of a full-scale airplane that flies in from above. In the end, the show seemed to do what the woman in the chair suggests a good musical does, it gave us something to smile about and a tune to carry home in our heads. Although aspects of production may be arduous, with complicated set builds, long rehearsals and pre-performance jitters, cast and crew such as junior Valerie Grespan found fun in the challenge, “These were the days that everyone’s energy and patience was challenged,” she reflects on Saturday rehearsals, “…but really I found it to be when we bonded as a cast the most. It was tiring but we were always in it together!” The high school musical is made possible through the hard work of a cast of 31 students along with an additional 32 students in combined crews- set, props, costumes, lights and sound. Several cast members even had a “research” opportunity on a recent trip to New York, during which time they had dinner with Lisa Lambert, who wrote the musical’s original lyrics and music.

The time spent on this year’s production proved to be a labor of love as senior Ava Hall expresses a common feeling on the musical, “Of all 14 productions I’ve been in at ASIJ this has been the most fun I have had during the show. The Drowsy Chaperone is an amazing show that allows every character a moment to shine and it really forced all of us in the show to grow as performers.”

We would like to thank everyone who had a hand in this year’s performance and give a special thanks for support from the Friends of the Fine Arts. “It felt like the students really took the musical’s message to heart,” Jessi Miller (music director) recalls after the performance, “they created a joyful world of color and light, and all of us walked away with great words and songs in our hearts.”