Tomoko Nakai’s HS Japanese 9 classes recently began their unit on traditional new year’s food and traditions are exploring traditional new year’s ozoni and how the soup differs in every region. Renowned Chef Hajime Kimura visited ASIJ to help introduce students to the world of washoku,  and to introduce the techniques and ingredients used in making ozoni. Head chef at Takehashi Japanese Restaurant in Otemachi’s KKR Hotel Tokyo, Chef Kimura has more than 22 years of experience and served an apprenticeship for four years to legendary “Iron Chef” Koumei Nakamura. The Japan Center arranged Chef Kimura’s visit to help introduce this unit, at the end of which Japanese 9 students will present their research on a specific region’s ozoni soup.

What is Ozoni? Ozoni is a dish made to celebrate the new year. It is eaten on the first three days of the brand-new year (January 1–3). A soup cooked with mochi (rice cake)—the main ingredient—and various other ingredients, it comes in different styles depending on the region and household. Chef Kimura began his class with the history of how ozoni traditions began during the Muromachi period and how it has evolved over time and what it symbolizes. Ozoni tells the history of its local land, people, and ingredients as the soup often contains ingredients particular to that specific region, endearing itself to the local Japanese with its furusato no aji, or hometown taste.

Why is it eaten on New Year’s? Starting the year by cooking in a single pot, and then eating the mochi and local produce that were offered to deities on New Year’s Eve, is done to pray for several things: Safety for the entire year, good living and nature’s blessings. 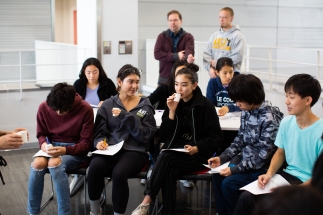 At the base of every washoku Japanese dish is its dashi. Unlike Western stocks, that involve simmering meat, seafood or vegetables for hours on end to extract every last drop of flavor, a delicious dashi stock can be made in less time with water and selective dried ingredients. Although the process differs slightly from one ingredient to the other, the idea is to briefly simmer dried seafood or vegetables to extract just the umami and nothing else.

After Chef Kimura’s live demonstrations of making three dashi: kombu kelp dashi, katsuo bonito dashi, and ago flying fish dashi, students and faculty had the opportunity to taste them one by one then to taste a blended ago and kombu dashi with some miso. Combining these dashis resulted in a synergy rather than a simple addition of flavors. “Students were full of curiosity to learn about the history and beliefs of eating ozoni,” Chef Kimura said. ”They were fascinated by how the aroma, color and taste changes when the dashi broth is blended to make a richer flavor.”

Chef Kimura also shared his ozoni from his hometown in Nagasaki called guzoni 具雑煮, made of blended ago, dried shiitake, and kombu dashi highlighting its use of the region’s specialty of buri or Japanese amberjack/yellowtail. 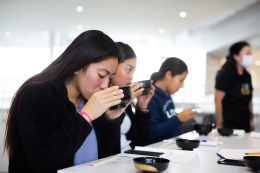 “This was the tastiest ozoni soup I have ever eaten in my life. This was an eye-opening experience as I realized there were so many things I did not know about Japanese customs and traditions. It gave me a new perspective and I will never see ozoni soup in the same way!” commented one of the students after class.

We would like to thank Chef Kimura for sharing his expertise with our community and enabling students to learn about Japanese culture through food in an authentic and meaningful way.