This year’s VEX Robotics Competition saw 32 teams come together for a battle royale over two days of testing technical feats.

For those of you who don’t read binary: 30 teams of robots joined us this year for ASIJ’s biggest ever VEX Competition. END_OF_DOCUMENT_TOKEN_TO_BE_REPLACED

Projectiles whizzed through the air as robots took aim at this year’s VEX Robotics Tournament. Held at The ASIJ Theater on November 13-14, the event saw 24 teams from around the world battle it out. Played in alliance with another team on a square field, the object of the game was to score the maximum amount of points by firing balls into the goal, with an additional 50 points available to any robot that could finish by picking up its teammate. Competition was fierce, especially during Saturday’s elimination rounds. 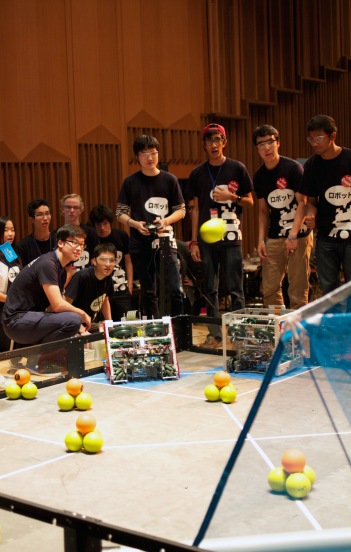 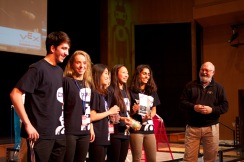 ASIJ’s Ninjabotics teams faced stiff competition from the visiting robots and the tournament champion was an alliance of the three teams from Foshan Nanhai Yanbu Middle School. Foshan also won the Programming Skills and Robot Skills Awards based on their consistent high scoring over the two days. Team 82M from Tianjin International School won the excellence award. ASIJ’s 901A team took the Amaze Award, 901B the Build Award, 901Y the Design Award, 901M the Judges Award and 901A the Sportsmanship Award. Chadwick International School from South Korea won the Create Award and Christian Academy in Japan received the Innovate Award for their robot design.

The competition was streamed live on ASIJ TV, allowing supporters overseas to follow their team’s progress. Four students provided multi-camera coverage of all the action throughout the day under the direction of Tai Dirkse. The event is also archived, so if you want to see our robots in action, head to http://tv.asij.ac.jp/.

Thank you to all of the National Honor Society students who supported the event. They worked hard resetting the two competition fields between each match, a task made trickier this year with the need to balance balls in a pyramid. Thanks also to Karyn Watt (HS Science Teacher) and Kevin Randell (HS Science Teacher) for supporting our robotics teams and organizing the event, high school teacher David Neale for emceeing and the many other faculty and staff who helped with judging, refereeing, transportation, hospitality and event production. (Matt Wilce, Director of Communications)