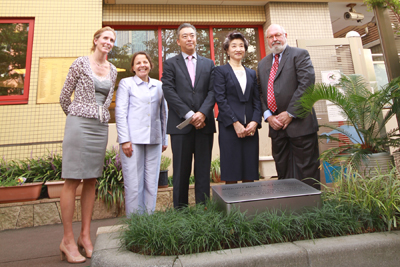 On Friday, October 5, the ELC playground was dedicated to Mr. Minoru Mori. Mr. Mori was a huge supporter of ASIJ and of the ELC. It is because of his vision and his support that we are fortunate enough to have such a lovely facility where our children have the opportunity to learn. Mrs. Yoshiko Mori and Mr. Hiro Mori were our special guests along with representatives from the Mori Building Company. Also in attendance were Ed Ladd, Tim Thornton, Board Chair, Stephanie Toppino, Judy Beneventi, and members of the ELC PTA and ASIJ’s Board of Directors. In addition to comments by those present, a letter from former ASIJ parent, Board Chair, and Head of the Finance Committee, Thierry Porte, was read by Ed Ladd.

The dedication started with an ELC student performance under the direction of ELC Music Teacher, Mayuka Suzuki. The children sang two songs, one of which was in Japanese, much to the delight of Mrs. Mori. We believe that Mr. Mori would have loved a playground dedication because in order for him to be so passionate, purposeful and innovative, Mr. Mori must have spent much time at play. There must have been aspects of his work that resulted in the sort of joy that comes with we call “play” at the ELC.

At the ELC, we want children to be innovative, motivated and visionary. Mr. Mori was a model innovator and visionary for us and for our children. He made his mark on Tokyo, Japan and Asia, and we are especially appreciative of the difference he made in the life of our school and our children. A plaque, designed by architect Paul Tange, former ASIJ parent, was unveiled at the entrance of the playground. We were honored to be able to thank Mr. Mori, in our small way, for his support. (Judy Beneventi, ELC Director)