Where does it happen that you take a twelve-hour flight, land in a foreign country, sleep a few hours and by 6am the following morning find yourself so included by and embraced in a community that you feel you have always belonged? It happens at The American School in Japan.

This was literally my experience in early December. Having written in advance to the Development Office and received a wonderful invitation to visit, plans were in place for me to teach a couple of classes, have a tour of the latest improvements and discuss new possibilities with faculty and staff at the school where I’d spent some formative years of my own childhood. It so happened that the best time for my visit would happen on my very first day in-country. So I somehow managed to dismiss jet lag and land right-side-up on the other side of the Pacific from my home in Los Angeles.

Since it had been ten years since my last visit, it was with some trepidation that I waited in line to have my Passport examined at Narita. Would I still speak enough Japanese to make my way on the train system? Would anyone at ASIJ still remember me? Would I have something valuable to offer during my classroom sessions?

Not only need I not have worried, the reality of my visit to ASIJ unfolded in what might best be described as magical. I slept a few hours and rose at 5am to meet one of the school buses. Walking in the pre-dawn of a chilly morning, I joined the neighborhood parents and children as we waited, and our bus arrived exactly on schedule. Riding with the students was both geographic travel and time-travel, as memories of my own fifth-grade bus journeys surfaced as though they’d happened only yesterday. 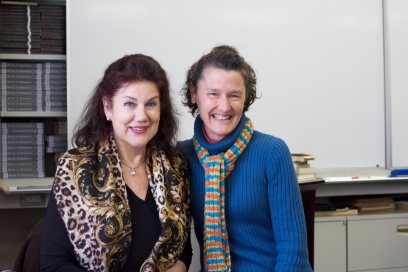 Sunlight was glancing through the early-winter leaves as we arrived at the campus, and at the foot of the bus stairs stood an adult welcoming each child back to school, and then welcoming me as though I arrived every morning just as the students did. Jarrad Jinks (Alumni Relations Officer), with whom I’d been emailing for several weeks, was there to greet me with a much-needed cup of coffee, then led me to my first class. As the guest of tenth-grade English teacher Karen Noll, I’d be discussing text and subtext in theater, a perfect match to the students’ just-completed study of Shakespeare’s Much Ado About Nothing, and an appropriate precursor to their upcoming acting work.

The students were as bright, aware and diverse as I remembered, not only from my month-long artist-in-residence work a decade earlier, but also from my own student days at this remarkable school. I shared stories about my own recent performing, then we dug right into the work, Karen and I working as if we’d been team-teaching for years. And for me, the work itself was seamless, as I was a guest-teacher/visiting artist for fifteen years at schools in Los Angeles, California, Colorado Springs, Colorado and Fairbanks, Alaska.

There were other perks to my visit: a delightful lunch at a nearby soba shop; a tour of the new Japan Center; a visit to the new library where I reconnected with the wonderful staff; a visit to the spectacular new theater, where my mind immediately began to imagine new workshops and productions. And one final unexpected treasure. Because I mentioned I’d played “Lady Larkin” in Once Upon a Mattress, before I left, an envelope was presented to me of stills I’d never seen, co-starring in that wonderful musical. What fun!

From this list, you can discern that this particular visit was tailored for my interests. What might your own tour of ASIJ look like? Why not contact Erin Nelson (Director of Advancement), Matt Wilce (Director of Communications) and Jarrad Jinks at the Development Office and find out. I promise, you’ll be enriched, inspired and glad you planned the trip. (Mara Purl, Class of ’68)