“Sometimes your vision for a production doesn’t turn out the way you anticipated, but that’s often a good thing.” Those were the wise words of one of this year’s successful student writer-directors of the One Act Plays. This special student-led drama event is a multi-month process that begins with mere ideas for original plays and ends with ensemble performances. Though intensive and exhausting, because the process is the students’ own, it is particularly fulfilling. After February’s shows, two of the writer-directors reflected, “We had little-to-no idea what we were doing while writing, but it was fun to experiment and test the limits of what we could do.” 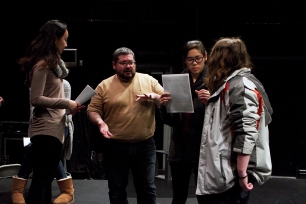 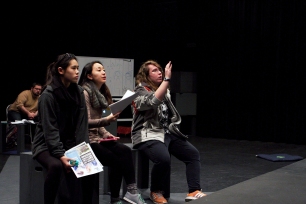 This year’s One Acts consisted of five short plays, written, directed and produced by our students. In January, the student-directors—most of whom were first-time directors and playwrights—had a unique opportunity: with the generous support of the PTA, they were able to work with Ross Williams, Producing Artistic Director of the New York Shakespeare Exchange, for a week of advice and critique. During what was only the second week of rehearsals, the student-directors learned a tremendous amount and enjoyed their time as well. Williams’ perceptive and valuable advice helped the directors realize their visions at a higher level.

Writing plays and directing them are different, but equally challenging creative tasks. Transforming an artistic vision onto the page, then auditioning, casting and working with a busy cast and crew certainly will test the imagination and character; as senior Annie Westmoreland commented, “When it comes to directing, you can’t be shy. You have to take chances and accept when things don’t work out.” However, this year’s group of students worked hard with the enthusiastic group of young actors in the One Act Ensemble to put on plays that were both entertaining and thoughtful.

For those of you who could not attend the event, here’s what you missed: 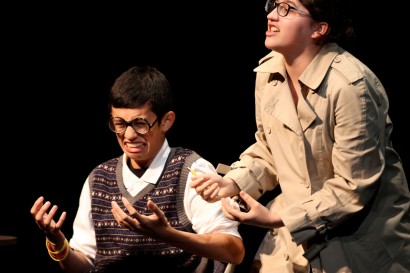 Written and directed by Maggie Freeman (Grade 11) and Manon Hale (Grade 11), Whodunnit? was a tongue-in-cheek murder-mystery in which two detectives work to crack the mystery of a woman’s death, with only the audience finding out the true culprit in the last moments of the play through a dramatic reveal. 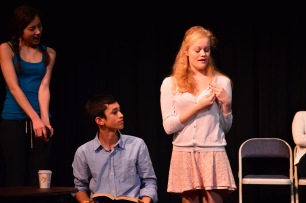 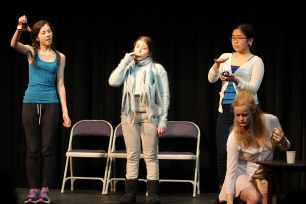 Sarah Tropp’s (Grade 10) Thought Process was based on the Freudian psychology of the three parts of the brain (desire, reason and morality), each portrayed by characters who battle with each other while commenting on and eventually interacting with “their human.” Regarding rehearsals, Sarah said, “They were like a stress relief from school. But having fun made my actors and me bond together, which is pretty much what I needed in my play.” 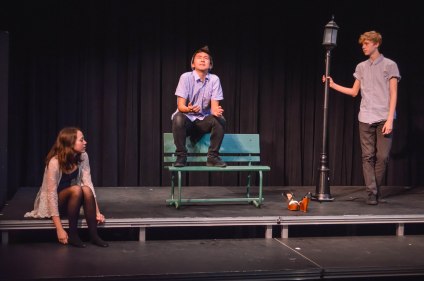 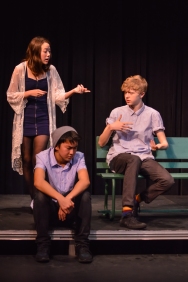 Written by recent graduate Maximillian Loveman ’15 and directed by Erin Isomura (Grade 11), Turnt was the story of one night, one park and three college students—a past partier, a former high-school nerd, and a British exchange student—and how not getting into a party can be a good thing. 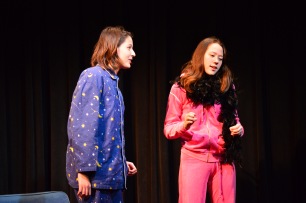 Our most meta-theatrical work, written by Aislinn O’Leary (Grade 11) and directed along with Sae Ishizuka (Grade 11), How To Write a Terrible Play illustrated a playwright who struggled to finish a play by its deadline when a fairy-playmother appears and tries to help. The ideas the writer tests out were acted out in secondary scenes, and these ranged from the amusing to the ridiculous. Fortunately for the playwright, it was merely a dream. 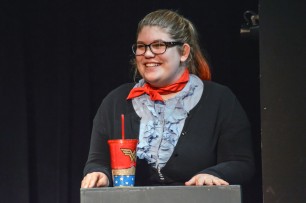 Rounding out the evening was a play written and directed by theater veteran Annie Westmoreland (Grade 12). Her play Love, Delayed depicted two people connecting while waiting for flights at JFK airport, with their relationship eventually going to a surprising place, literally and figuratively. Recently Annie reflected on the experience, saying that as a result of writing her play and working with her terrific cast, she had “never felt as connected to a show as [she] did this year.”

My fellow teacher-advisor J.D. Andrade and I admired the risk-taking and leadership of these students, along with the talented ensemble of over 23 actors and crew, the latter led by the generous and talented Ed Gilmartin (Theater Manager). Given the short period of time in which they had to move from page to stage, we are rather proud of what they were able to accomplish with this year’s One Act Plays. (Mary Pfeiffer, One Act Plays Advisor)