On Tuesday, May 8, UWC ISAK students Mohammed Saif, Bandiel Shongwe and Gall Sigler visited several middle school classes. This is the second year that Project UMI has visited ASIJ to share their environmentally-minded message and this time around, representatives spoke with Kevin Knapp’s classes and one of Pete Dohrenwend’s classes.

Project UMI was founded in 2016 with a mission focused on the degradation of coral reefs in Japan. It is predicted that by 2030 Japan’s coral reefs will be completely eradicated but by changing small habits in our lives, we can slow down this eradication process. Protecting the reefs means protecting the only habitats for many marine animals, securing an effective tsunami barrier and preserving the economic benefits provided by tourism. 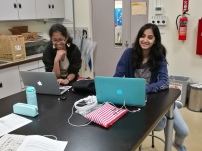 As part of their mission, students with Project UMI share research and information on the degradation of Japanese reefs with their peers and other schools. During their presentation to ASIJ middle school students, they detailed reasons we find Japan’s reefs in their current condition:

Mohammed, Bandiel and Gall then shared Project Umi’s mission—”Think Big, But Start Small”—a motto they use to inspire individuals to do what they can to help. They began with a goal to reduce the use of plastic bags. Starting with research at their own school, they discovered students at UWC ISAK used about 2000 bags in six weeks. They implemented system to decrease the amount of plastic bags used by their peers. The system involves creating availability of reusable bags and a social responsibility to use them respectfully and as needed.

Project UMI shared their research, message and progress with our students students to raise awareness of the state of Japan’s coral reefs and to inspire actions individuals can take to contribute to reef preservation:

After Project UMI’s presentation students watched a Youtube video, played a Kahoot with questions related to the presentation and video, and took time to ask questions.